There are countries that are known and unknown to most especially where you can enjoy extraordinary and unique flavors.
Here you will find information and experiences on a trip "hit and run ... quietly."
Friday, August 09 2013 11: 33

A chance discovery, we were going in the hills north of Mantua and just below Lake Garda. The navigator has brought us out dall'A4 in Nogarole Rocca and then immerse ourselves in the various provincial of Verona countryside, dotted with orange columns of speed cameras, when we cross an old ruined bridge. We stop on the bridge (which has room for parking and camper) and, leaning out from one of the grates we see this little village.

So, we decide to explore it, and it was a pleasant discovery.

It is part of the municipality of Valeggio sul Mincio, in Provinicia of Verona, in fact on the river Mincio, and, in fact for some years he was associated with the town of Gonzaga, which develops as Monzambano, on the west bank of the river.

The village has grown thanks to a ford of the river and a wooden bridge. Overseeing a natural boundary and having a bridge, it is the classic merchant and esattive activities (tolls) and infrastructure needed to protect the economy, and abbeys are developed, fortifications and castle.

In 1395 it was built the Visconteo bridge, upstream of the village, connected with its 650 meters the Valeggio castle integrating it into a military architectural system extending over 16 kilometers. This greatly reduced the importance and economic power of the village, but he pushed the development of the energy use of water with the construction of many mills.

Today there are several houses with the wheels in iron and wood of the old mills, four or five are still functioning, and most of the buildings with mill wheel and are engaged on the ground floor to bars, ice cream parlors, restaurants and taverns, while the floors above are of a good standard accommodation for a unique stay.

The location of the village, on the border, which for years was the state, has caused the involvement both in the Napoleonic wars in all three wars of Italian independence (1848, 1859 and 1866) together with the load of looting and destruction.

Tortellini of Valeggio or Love Knot

The culinary opportunities of the many restaurants in the village include courses of Mantua's tradition (pumpkin tortelli, capunsei, ..), the river fish (pike, eel) and Garda (bigoli with lake sardines) as well as what is the real specialty of the place tortellini of Valeggio.

According to me, we talk about Valeggio tortellini often as a Veronese variation of tortellini bolognese or Romagna cappelletto. Without deepening I would say that has the shape of the first and the complexity in the second filling. They tell me that the tortellini of Valeggio is part of the tradition, perhaps in broth in a much larger area of ​​the zone on the Mincio and many variations.

The recipe calls for filling in the utlizzo of pork, beef, veal as well as ham, chicken liver, bread crumbs, vegetables and Grana Padano.

The main feature must be the dough that is rolled very thin, like the silk that is cut and knotted around the filling like a handkerchief. Hence the name of love knot, or by a medieval legend that tells of a love story between a nymph and a soldier characterized by a scarf tied as a reminder of their love. 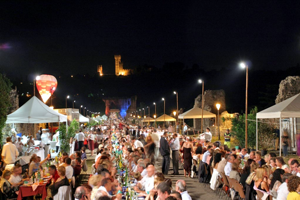 All this is celebrated every year on the third Sunday of June with a table that is spread throughout the Visconteo bridge, which is called: 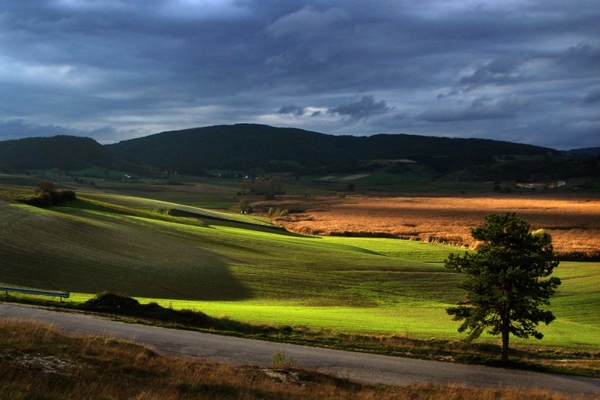 Colfiorito is part of the municipality of Foligno, it is located on a plateau of about 300 has, at an altitude of 760 m above sea level, along the State Road 77 of the Chienti Valley, which connects Foligno in Macerata; Highland side falls under the jurisdiction of the municipality of Serravalle di Chienti, in the province of Macerata.
The karst plateau comes from the drying up of seven lake basins, of which only remains the swamp, and is occupied by about 5.000 inhabitants. This set of plateaus, placed at the foot of Mount Pennino know or known as Plestini highlands (or Colfiorito) taking the name from the ancient city of Plestia; they are characterized by the presence of vast plains, known as "plans", which are largely remnants of ancient lakes dried up naturally or reclaimed by man. They are the Colfiorito Plans, Cesi, Populate, Annifo, Collocroce, Arvello, Ricciano and Colfiorito marsh and contain at altitudes between 750 and 790 m approx.

The country itself, according to Istat the 2001 census data, counts 389 residents. 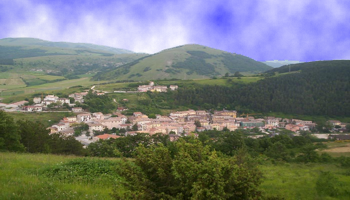 Colfiorito arose after the abandonment of the Roman city of Plestia, at the end of the tenth century, on jumps that Pizzale. Subsequently, the municipality of Foligno built in 1269 the castle; immediately it became very important militarily and civilly, for an advanced strategic point of the Marches. In the mid '700, the population began to settle outside the ancient walls along the Lauretana road.
Before and during World War II, Colfiorito hosted a fascist prison camp.
The 26 September 1997, 11.40 to, that of Colfiorito was one of the areas most affected by a powerful earthquake of magnitude 5.8, which caused considerable damage to areas inhabited Apennines Umbro, including Foligno and Nocera Umbra.

Things to see, to feel and to buy.

Historically, the plateau is known for the cultivation of the red potato and lentils, which are sold directly by small producers, constantly present along the highway 77, in fact I found the red potato by buying a lot from a farmer returning from Cascia .
I do not know but they are exceptional revealed.
The country of his has nothing to be a tourist attraction of great appeal. In my opinion, for a historical view, you must visit the Basilica of Plestia. This is a proto-Romanesque church and a "border" sanctuary: it is located exactly at the crossroads of the diocese of Foligno, Camerino and Nocera Umbra.
At one time the cathedral basilica, where a Bishop Florentius was present at the councils of the 499 and 502, was later destroyed along with the city of Plestia Emperor Otto III. Built on a more ancient Umbrian sanctuary dedicated to the goddess Cupra Umbrian and close to a big road junction importance up to the Early Middle Ages, it was rebuilt around the year 1000, year for which even the crypt and the apse . The nave suffered, however, several reconstructions and the portico was probably added in the seventeenth century.
Of great interest is the crypt, assigned to the eleventh century, is divided into five small naves by three rows of columns surmounted by capitals of redeployment, some of which are marble decorated with geometric motifs. Archaeological excavations conducted since the early '60 have unearthed the remains of the late-republican buildings based on an Iron Age village and a large pre-Roman necropolis, which has returned funerary objects dating from the tenth to the third century BC .
For those who have interest in nature can visit Park and the Colfiorito marsh, small but full of interesting views.

The purpose of the visit, however, remains the Red Potato (including short-depth article) and lentils. The right opportunity is the Festival of the Red Potato to be held from the 13 August 25 2013.

Posted in Location
TAG of this recipe
Read everything...

Recipes for all occasions

for the goods they buy tips

© 2016 by Azdora and Mangiamando. All rights reserved. Interior design and development.
Mangiamando recommends Find a work. Pictures of Mangiamando.
Su