Cooking is a passion. Eating well is equally so.
Sometimes it's nice to go out for dinner at a nice restaurant. Better if the bill is sustainable and what is served there is so good that he decided to redo at home.
Here we talk about restaurants, taverns, but above all of those dishes that have impressed us.
Not intended as a guide to the restaurants, you want to be a collection of the best dishes we ate.
Tuesday, August 13 2013 16: 19

They gave us a box RegalONE and decided to exploit it for a couple of days in this hot August. A bit 'for the decision not to make too many miles, a little' to the availability of seats and a little 'for the lack of confirmation of the relationship between RegalONE and some hotels, we came to Castellaro Lagusello, in the province of Mantua, about 40 minutes from the city and only 20 from Lake Garda. The country, as presented in the site of the most beautiful villages in Italy, it looks really nice, and after we stopped in Borghetto sul Mincio (really lovely), expectations were high.

The interesting part is the fortified town, which, however, is almost entirely private and not open to what remains you visit in less than a minute 15 with much contemplation and several photos. In short, a disappointment. Luckily we found this delightful restaurant.

The atmosphere is very nice with many well-spaced tables and kept in order in an exemplary manner. The staff is prompt, courteous and knowledgeable and kind, but (what is not obvious these days), the holder proves to be the perfect host, not only intrattendo customers in the piano bar, but by relating in a unique way: after a while you feel part of the local ! If I lived closer, would become "my" restaurant, the place to bring friends, relatives and customers are sure to make a great impression.

The menu is comprehensive and well structured, with proposals related to the area of ​​land that is caught in freshwater. Although Romagna, food not so accustomed to the light, I have to say that the proposals in the area are more suited to a less torrid season in August Po. I could switch baked lamb shanks braised donkey and smoking, but can not we heard of affirontarli.

We focused on tasting appetizers with salami really good, well priced and well-portioned, really good polenta with mushrooms and sauce on a pike very, very good.

On the first we spent the classic pumpkin ravioli and we focused on a plate less known but much more characteristic of the area: the capunsei. 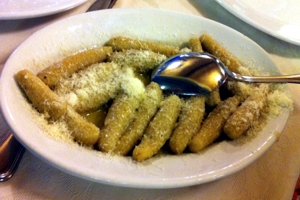 Gonzaga is the location that holds the ownership of the flat, at least that is the common values ​​the most.

Castellaro Lagusello is a few miles away quind can be said to be exactly the right place.

As with all popular dishes variants, both in the basic recipe that dressings are endless. In fact it is dumplings with breadcrumbs, mixed with Grana Padano cheese, a sprinkling of nutmeg, and a clove of crushed garlic, a little 'butter, melted (originally probably used more lard) and some egg and tied with broth meat. Added to this are the customizations, such as in the area of ​​Solferino in which you add the macaroons.
It 'good to see normal because we are dealing with a variant of canderli Alpine and Dolomite. The name derives, according to what they told us, by the fact that at one time were the baked stuffed capon.

However, they are really good, we have recommended them to the butter (no sage) and proved to be a tasty first in his sempicità base.

We also tasted the Trecciotti meatless stuffed with ricotta and nettle, good and gentle, as well as a variant of rice with sausages, or a risotto with mushrooms and salami by taste, but pleasant.

Starters cost from the 4 5 EUR (7 tasting), the pasta dishes are all under the 7 euro, and the latter ranging from 6,50 the donkey stew to 15 euro for a nice fillet with green pepper. The cakes cost 3 / 3,50 euro. Prices more than fair, really good when compared to the quality of the ingredients and taste of the dishes.

This has left the booking voucher, the right hand is on the menu. It states that it is the first time we use Groupon, so maybe some "subtleties" I have escaped.

chronicle
The restaurant is in a decent location, practically on the beach, too bad it's not the beach from inside the room visible. The first question is when do I note that nell'insegna does not say "restaurant."
The restaurant is good, typical structure from seaside pub brewery with wooden paneling and tables quite close together without hindering the movement of personnel. If you point to the discretion it is necessary that the local fills, but suggest you speak softly.
The welcome is very friendly and practical, people like me who did not know how it worked did not need to show the emails printed bundles: the system mytable It works fine.

The waiter arrives to take the controls and find that:

I have a little discomfort, but the Azdora can sedarmi until the arrival of the dishes 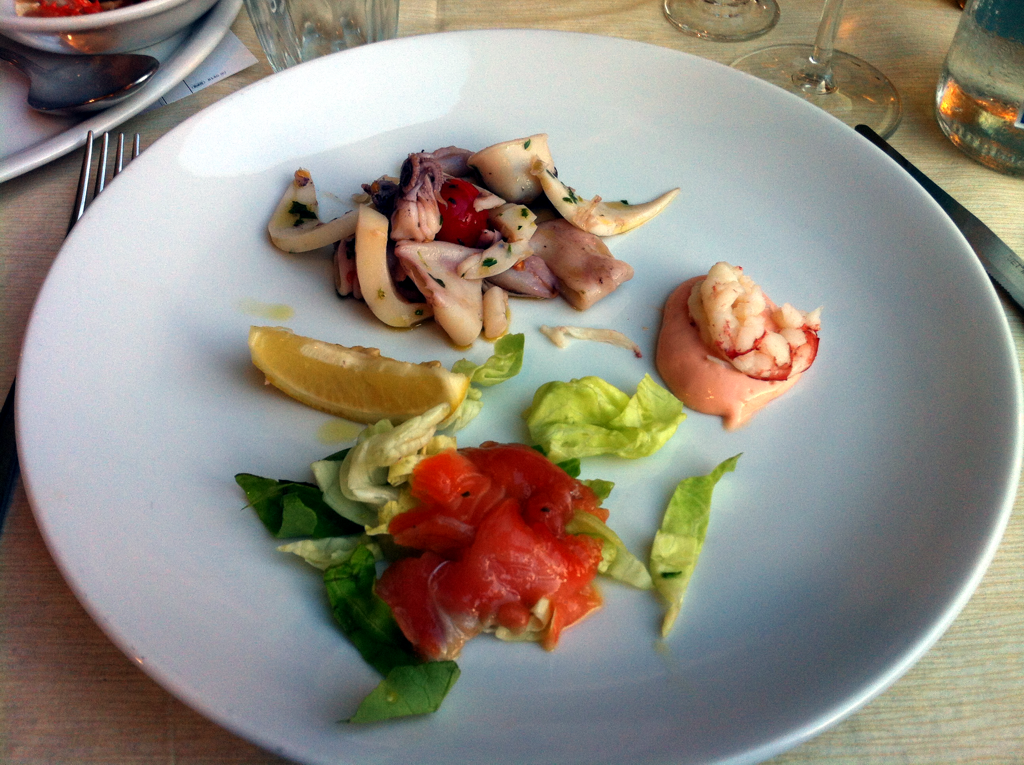 As you can see the presentation is a bit neglected and slightly warm (see lemon). What perplexes me is the single shrimp, and shrimp cocktail! It certainly is not big.
But the salmon, while not perfectly clean is pleasant, and the seafood salad is tender and tasty. The lonely shrimp drowning in sauce.

The presentation of this dish made me collapse hopes !! Here's the picture: 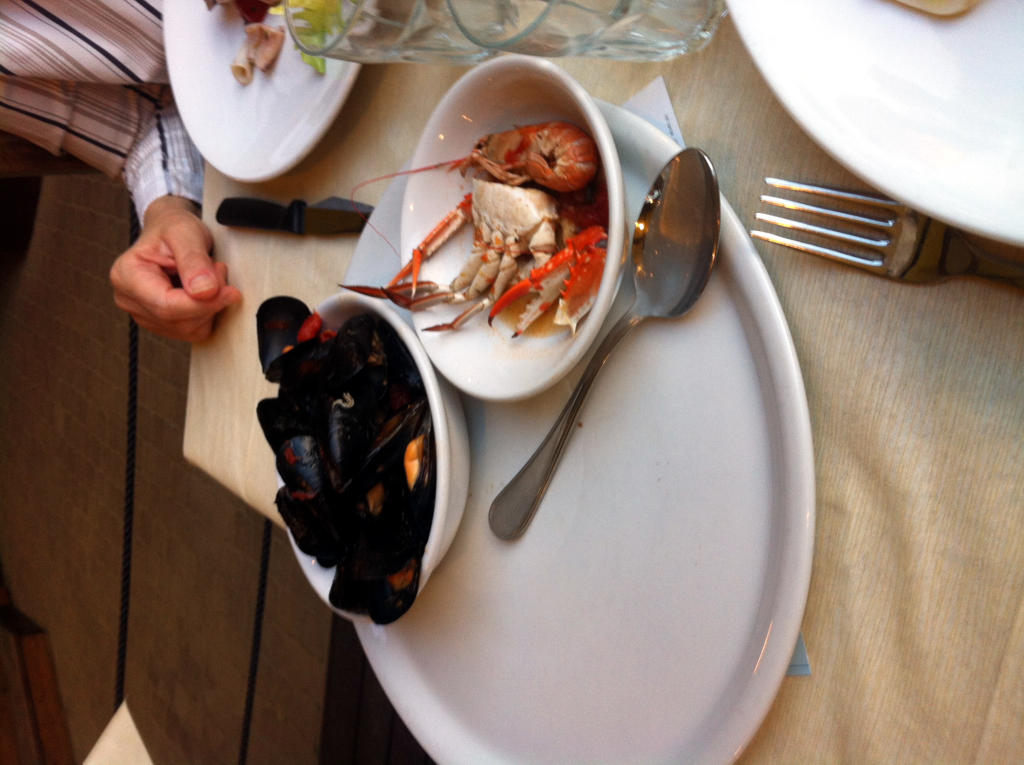 The first thing I asked was, "Where's the other part?", But how do you present a 30 cm dish to let it half empty? Door bowls and just. Also the really shameful is that we can stand in a menu for two we split a piece, maybe a fish, but split a shrimp mignon is difficult. But no I have never in my long association of restaurants, taverns, festivals and party celebrations find myself divided into two HALF crab !!! , No kidding, they were served a stew for two consisting of SCAMPETTO ONE AND A HALF CRAB be divided into two !!!
However the mussels were decent, not too spicy and just for one. The stew does not deserve comments.

First
Pumpkin ravioli with potato and shellfish
Ordinary in the presentation, I think the best definition he gave it, as always, the Azdora: "It 'a dish to the table, even produced by a catering company canteen." Not bad nor good but, as you can see from the photo of the crustaceans is nowhere .... 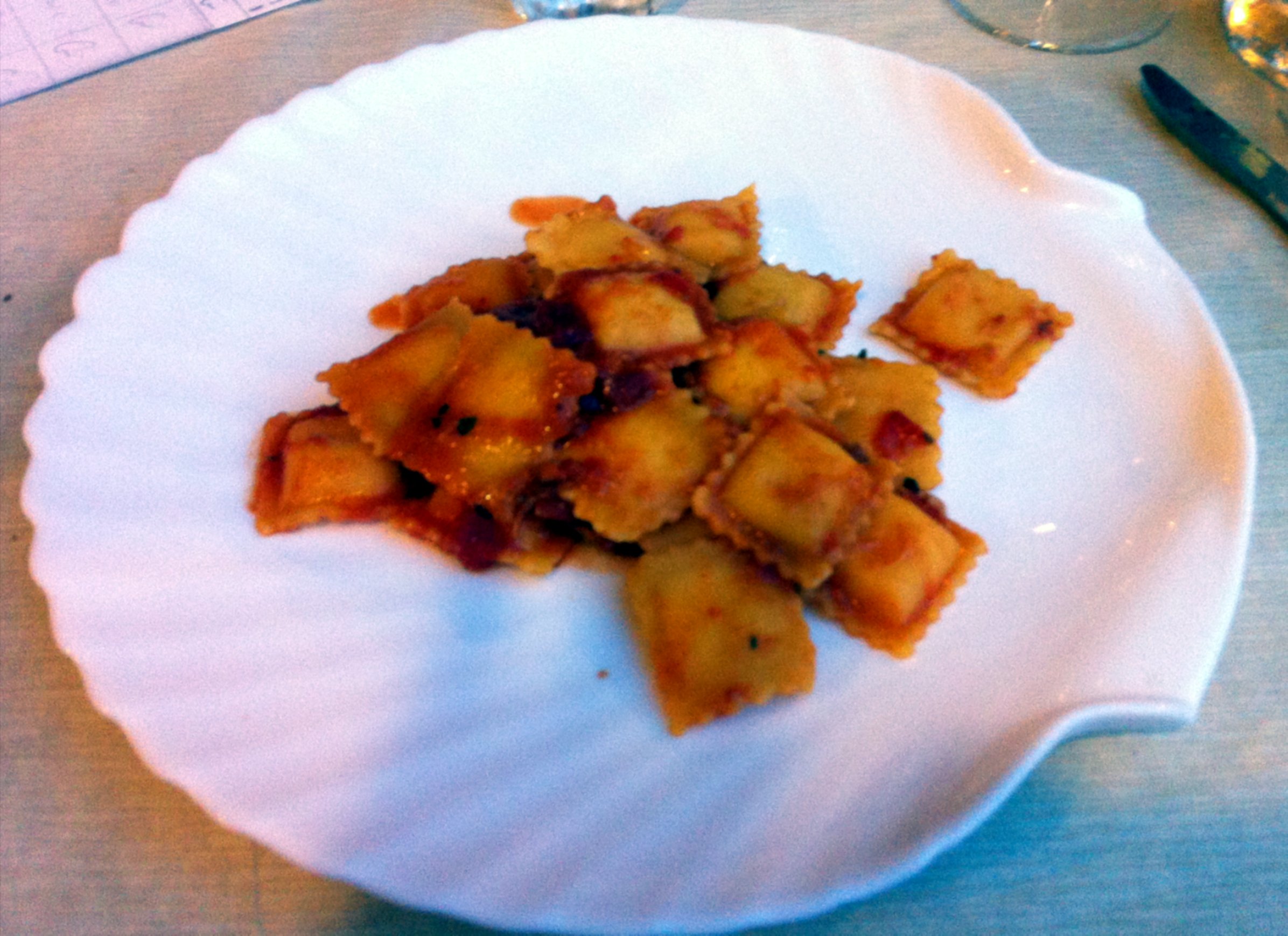 Verily in dell'Azdora dish was the second claw of the slain crab in sauce (the other half of the body and the paws have no news ...), but the taste does not change.

Second
Bream baked in foil with vegetables (zucchini peppers and tomatoes) It has instead become bream sautéed with cherry tomatoes.
Already arrival introduces me half filleted bream breaded and piastrata with radish julienne, no tomatoes. I can not resist, and I ask him but the tomatoes? Then the brave young man (in my day working at Foot Loker, the phrase was always fixed "then guys, all right?", When he told us we had felt gratified, but then we heard giving the "boys" also our neighbors to the table that passed the 250 in four years !!! ..) recovers me two dishes where the small bream was well equipped with half a tomato baked. The fish was not bad but it had been cooked too little in the two steps that made (the pan and the oven I think ...).
Here I no longer took pictures because now the fact of making a serious review was gone .....

Sweet
According to you between a puff pastry with chantilly cream and chocolate chips, chopped pineapple sorbet and the majority of the Italian population greedy What It Takes?
Guessed?
Well the guy comes and goes "You want EVEN sweet now?" Well, I say there is still space ... and the waiter then "Guys, you can choose from lemon sorbet sorbet and coffee. The millefeuille is over and the pineapple is not arrived ....."
And so we took a really great coffee sorbet. Really, I do not know good kidding.

Coffee & co.
You know how every time you are out on the table every waiter never misses the opportunity to ask if "you want something else? Coffee, ammazzacaffè .....". Well until I revealed the request waiters are gone as advertising characters unicredit ....
Meanwhile we could see, looking at the other tables and parlandp with guests:

Final considerations
If you consider the cost (euros 34, 17 to foreman) I should not complain. It is true that if you had asked me the 137,50 I would have called the police, police, marines and NCIS. Really would also be too much if there was anything we needed to be and in portions trucker horny.
If you compare these with 17 12 euro (coffee not included except for one day a week) to spend in one of the Restaurants Blue Fish (Fano, Cattolica, Rimini, Cervia) at the end of the dinner you will be more satisfied by them: they are structured as self-service, but the quality is great (short review).
Probably the place is not a fish restaurant and they were wrong to do the math. When I got the deal they had already sold more than 700. And I fear many will go away disappointed (about six tables that I heard there was none of satisfied).
I think if you had to draw tthe menu with more sobriety and he had sold exactly what was agreed (should be the norm, but it's a rare commodity ...) would it not exceeded 500 reservations, but qualcone would then be returned.
With 25 euro excluding drinks you could rearrange the appetizers: magar cold but 4 complete proposals and warm with adeguatei portions, two first courses: a nice risotto and spaghetti with clams. As a second and a half mixed fried grilled or fried and two skewers. Considering the redemption of the coupons and the return uccessivo con25 euro they were within the vast and people came out happy.
We are curious to take a Groupon deal for another restaurant we would like to understand if we had bad luck or if there is an underlying problem.


Posted in Eating out
TAG of this recipe
Read everything...

Recipes for all occasions

for the goods they buy tips

© 2016 by Azdora and Mangiamando. All rights reserved. Interior design and development.
Mangiamando recommends Find a work. Pictures of Mangiamando.
Su